Between 8 and 10 December 2017, the 5th edition of  Kasta Morrely Fashion Week reunited 30 fashion designers and top designers at Bizantiq Iaşi. They chose to launch their collections at the festival organized by specialists that belong to the history of creative industries development. Kasta Morrely Fashion Week, being a recognized brand for its national and international utility, is the only event in Romania that is organized, as it is well known, by specialists with authority for the legalized occupations of Events Organizer  and Mannequin. * The second evening of Kasta Morrely Fashion Week anniversary festival was opened by a special guest from PORTUGAL. The Fashion House A MONTRA VIP has been returning for the third time consecutively on  Kasta Morrely stage to present the 2018 collection for the first time in the world. A MONTRA VIP collaborates with various international designers from France, England, Spain, Germany, Italy and USA, offering ladies and gentlemen a generous range of cuts, materials and styles of clothing.

* In the continuation of the festival’s evening, TULLERIE by OANA STROICI from SUCEAVA launched its collection of bridal dresses. Designer Oana Stroici’s creations are made of passion for art, beauty and quality. The dresses are made of fine fabrics, of the highest quality, adapted to any silhouette, bringing feminine beauty to everyone’s attention. * For the third moment of the evening, it was the turn of the little ones to be the focus of attention. The children of Kasta Morrely Kids Program have attracted generous applause, presenting the moment “Through World History with Fashion Theater®”. The goal of KASTA MORRELY KIDS non-formal education program through Fashion Theater techniques is to shape and develop each child’s self-confidence, spontaneity, ability to communicate, and respect for the importance of team spirit.

* The only hat maker in Rep. Moldova IULIANA CHIROSCA succeeded in bringing the English spirit in Iasi on Kasta Morrely Fashion Week stage. The collection has been distinguished by London-ready ready-to-wear outfits and especially by the unique, daily-wear hats made by the designer Iuliana Chiroşca, created under the brand JULIE ANNE. *MIHU ‘BOUTIQUE in CLUJ presented for the first time a collection of urban-chic t-shirts with an avant-garde tint, dedicated to escaping from the typical daily and anonymous exits. The creations signed by ANDREEA MIHUŢ, designer Mihu ‘, promotes a sophisticated image that expresses a uniqueness accented by the personal footprint of each piece.

*MANDRIA from Republic of Moldova launched its latest collection on Kasta Morrely Fashion Week podium. Established in 2014, the project MÂNDRIA is a true promotion of the values of tradition, culture and civilization in the area of Moldova, with everything that is of high quality and universally valid. All the clothing pieces made by the handicrafts of the company “Mândria” are handmade, each ornament being unique, selected from a huge collection of traditional embroideries, owned by the designers of the project. *SAHRA DESIGN from Constanta presented for the first time at Kasta Morrely the collection called “Revival”. The collection began with evening dresses in dark colors similar to the black swan, which became the white swan. The collection includes elements of nature, the designer being declared she is of an incurable romanticism. Handmade embroidery elements, such as flakes, feathers, flowers, have attracted attention and have delighted viewers. *The final of the second evening Kasta Morrely Fashion Week autumn / winter 2017 was dedicated to a young designer from BULGARIA. MEGI PETKOVA presented her previous collections at Kasta Morrely Fashion Week and Sofia Fashion Week. MP Design by Megi Petkova is the artistic framework in which fashion pursues perfection. The designer creates clothing that emphasizes femininity and is based on impeccable work to the smallest detail.

At the end of the evening, according to the tradition of such international events by Kasta Morrely, the winners of the festival raffle were awarded with prizes offered by Betty Ice, Seroussi, Kasta Morrely, Decor Line and Estel Romania. 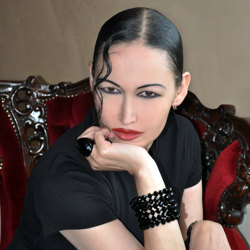